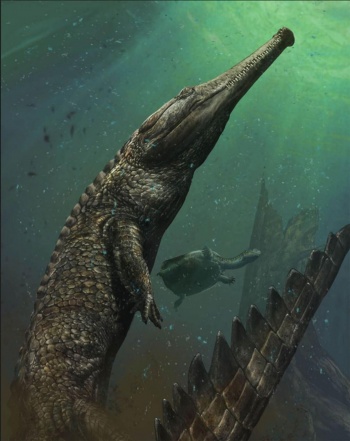 The fossilized remains of an immense predator may have belonged to the largest sea-bound crocodilian of all time.

It is hard for us in the present to picture the great Sahara desert, a famously dry, hot, and inhospitable patch of planet, as once being the bottom of an immense ocean. Yet, the huge desert holds many fossilized treasures from its time as a sea floor - some of the most complete fossils of marine life have been uncovered beneath its dunes.

To wit, meet Machimosaurus rex, one of the biggest marine predators of the Jurassic era. Its bones were discovered in the southern tip of Tunisia by a team of paleontologists, and though the remains are fragmentary, enough exists for it to be named the largest of a peculiar species of crocodilians that spent its entire life at sea.

Rex was a sleek and toothy ambush predator, and at 10 metres was roughly the size of a bus - which might explain the sudden disappearance of Ms. Frizzle's 6th grade class. Frighteningly, it was not quite as large as its gigantic freshwater cousins, who could grow up to 12 metres and weighed up to eight metric tonnes.

In the gallery below, you can check out the size comparisons between some of M. rex's relatives and an unsuspecting human diver. Thanks, illustrator! Very helpful!

Something curious about this discovery is that it muddies the water, so to speak, about the Jurassic-Cretaceous divide. It has long been theorized that a massive exinction event took place about 120 million years ago, ending the Jurassic, but M. rex's placement in the geological time scale seems to bridge the gap. This suggests that some large animals, particularly marine ones, managed to survive whatever happened.

Crocodilians may not have always thrived through evolutionary history, but their persistence tells us they must be doing something right. Next time a comet collides with Earth, it'll just be crocodiles and cockroaches, conquering the rubble. Crockroaches! Oh man, I've gotta call Syfy immediately.