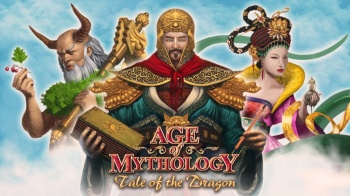 A new expansion for Age of Mythology is arriving on the 28th of January, updating a game more than 13 years old.

Downloadable content is rarely heart-warming, but when we are talking about an expansion for a thirteen-year-old game, the love is palpable.

Tale of the Dragon is set to expand beloved Age of Mythology on January 28th, on Steam. The expansion pack adds a new pantheon of gods, this time coming from Chinese myth and legend. Updates to the game, apart from a whole new faction, are to be expected.

In each Age of Mythology game, players choose a major god from any of the four major factions. The expansion adds Fu Xi, Nu Wa, and Shennong to the list of major gods, and a host of minor gods to recruit as you advance through the ages. Included among them is everybody's favorite Dragon-Ball-inspiring, To-the-West-Journeying monkey king, Sun Wukong!

Mythic units you'll add to your armies include dragons (naturally), terracotta soldiers and the vampiric Jiangshi. While many Age units can be countered in an elaborate "rock-paper-scissors" fashion, you can escape the clutches of a Jiangshi by scattering rice on the ground - it makes them hopping mad! (That was a joke for all the Chinese mythology fans in the audience. You're welcome, all two of you!).

This is hardly the first time an Age game has received an expansion long after its initial release; Age of Empires 2 is still going strong and growing, with a vibrant competitive scene and two new expansions since its re-release several years ago. Mythology's new expansion is even coming from the same team that developed those two. Let's hope Age of Empires 3 is next! I love me some real-time-strategy deck-building games...