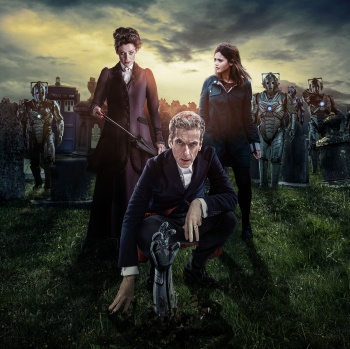 Doctor Who Series 10 will be Steven Moffat's last, and perhaps Peter Capaldi's as well.

I've grown rather fond of Peter Capaldi's Twelfth Doctor over the past two years. While Doctor Who fans were skeptical of this regeneration at first, Capaldi's performance went a long way towards belaying concerns and Series 9 cemented his legacy as a fantastic Doctor. But now that Steven Moffat has announced he'll be stepping down as executive producer, Doctor Who will be going through some changes. And if the rumor mill is to believed, one of those changes will be Capaldi saying goodbye to the role in Series 10.

Let's focus on the facts first: Steven Moffat revealed last weekend that his Doctor Who run would conclude in 2017, at which point Broadchurch creator Chris Chibnall will take over. This was quickly followed by a source within the BBC telling the Daily Mirror that Doctor Who's fresh slate might include a new Doctor. "Bosses are already discussing a fresh start when Steven leaves," says the source. "They've been happy with what Peter has brought to the role but some think it might make sense to give Chris his own choice of actor to play the Doctor."

While this is absolutely still a rumor, it wouldn't be unprecedented. When executive producer Russell T Davies left the series in 2009, Tenth Doctor David Tennant went with him. This provided an opening for Moffat and Matt Smith to develop an Eleventh Doctor who remains a fan favorite today. BBC may wish to recreate that dynamic for Series 11, choosing an actor who better reflects the direction Chibnall decides to follow.

Personally, I'm not ready for Capaldi to leave at all. He developed a truly compelling Doctor over the past two seasons, and now all I want are more adventures with a new companion. That said, if Capaldi's role were coming to an end, that would lend a stronger dramatic weight to the events of Series 10. Moffat and Capaldi would have an entire season to make sure they ended on a high note - and that would be worth seeing.

Whatever happens, Capaldi will get one more Doctor Who Christmas special in 2016, followed by a tenth series in 2017. And unless one of you has a Tardis that can show us how the future unfolds, we'll have to wait for a specific answer later this year.