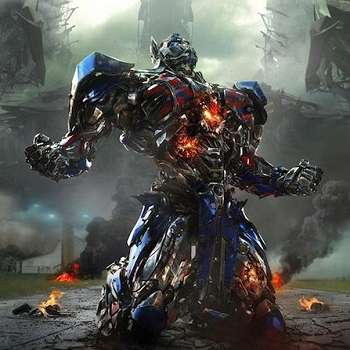 Not since Spider-Man: Turn Off the Dark have we seen an idea so uncompromising in its extravagance.

Earlier this month, Michael Bay dropped the news that he would be returning to direct a fifth and final entry (for him, at least) in the Transformers series, because who among us would turn down close to $200 million to direct what is essentially a glorified Ford Mustang commercial? It's like taking candy from Megan Fox's baby!

The Transformers brand, however, has always been a lot bigger than Bay, and as such, will continue expanding into whatever market it can after he leaves. But when you've already got your own ride at Universal Studios, where do you go from there?

The answer, obviously, is theater.

According to Variety, Transformers will be headed from sceen to stage via a live-action show that basically sounds like what Tracy Jordan's 43-year-old son in 30 Rock tried to achieve with his monster-themed restaurant, Staples.

Transformers Live will be a cross between an action-adventure spectacle, a theme park attraction and a theatrical show. Fans will experience intense action, beautiful visual moments, an emotionally engaging story, lots of humor and rousing music. The (Transformers Live) show will offer a fusion of proprietary technologies including robotics and advanced projection capabilities along with amazing aerial and acrobatic sequences.

Unfortunately for those of us here in the States who see this insanity as too good to pass up, Transformers Live will actually be settling down in China, in a custom-built 4,500 seat stadium being funded from the ground up by Chinese media conglomerate DMG Entertainment. In fact, it will merely be the latest in the 300 theme parks currently running in China, including the Shanghai Disneyland opening in July.

So if you've ever found yourself watching a Transformers movie and taking issue with the fact that Michael Bay directs action sequences like an epileptic, ADHD-riddled 8th grader, then book your tickets to Transformers Live today!