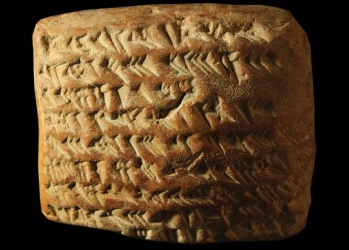 New studies show that ancient Babylonians developed a precursor to calculus, using it to chart the movements of Jupiter across the night sky.

Newton and Liebniz spent years battling to be recognized as the inventor of calculus; if new studies on ancient Babylon are to be believed, however, those two mathematicians may be orbiting in their graves at this very moment.

It seems some plucky desert astronomers were ahead of the curve, so to speak. According to clay tablets dating back as far as 350 BCE, long before medieval European scholars started poking at the idea in the 14th century, Babylonians had developed a precursor to what we know as calculus (and what Newton wanted to call fluxions).

The ancient people managed to do this with nothing more than cuneiform numerals, clay tablets and a stylus to write with, not to mention having to walk uphill both ways, and you should count your blessings you got an abacus to work with because back in their day they just had scorpions, etc.

What inspired Babylon in such a way? As with our better known math-men, it was the movement of the planets. In particular there was Jupiter, known as the White Star and connected to the Babylonian god Marduk. Jupiter's presence in the sky over the ancient world was a time for celebration, and you just cannot miss that party.

Babylon, of course, is also home to the world's oldest references to beer, firmly uniting those two great pastimes of humanity: getting drunk and looking at space. Here's to you, Babylon.