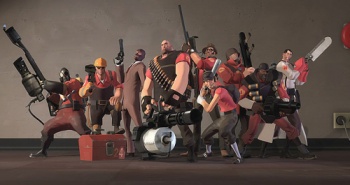 Nearly nine years after its initial release, Valve's Team Fortress 2 is getting a competitive matchmaking mode.

Nine years on, and The Orange Box continues to impress - I even keep a (totally unnecessary) physical copy on my bookshelf. Portal has never stopped making people think, and laugh; Half-Life 2 is still an incredible single-player experience; and Team Fortress 2 remains one of the most regularly played games on the planet.

The latter game's goofy characters, sharp level design, and constant barrage of updates and options has kept the players' interest steady like a Heavy's ammo by the Dispenser. It's a strangely low-pressure first-person shooter, until now. Hold on to your hats, folks: it's time to get serious.

Over nine months ago, Valve announced they were bringing competitive matchmaking to TF2; now, lucky players are preparing to enter the beta. Details are scarce, but they should start flowing in once gamers get their hands on the ladder.

Curiously, this is the second venerable PC game in a month to get a major new addition.

The speculation is that this may be a move in response to Blizzard's own new IP, Overwatch. The two games appear to have a great deal in common - they are each class-based team shooter games, in colorful settings with fun characters doing horrible things to one another. Overwatch, though, is hoping to rise in the ranks as an esports staple, like several of Blizzard's other games.

With TF2 in the competition, though, it's hard to say if Blizz's baby will end up on top. Time will tell, and I won't say who I'm rooting for.

It occurs to me now that there may be some readers who are not familiar with TF2. I recently described it to a friend as, "you know how in Hateful 8, there's a haberdashery that doesn't allow hats? It's the opposite of that." I'm sure you Escapists can come up with a better description.