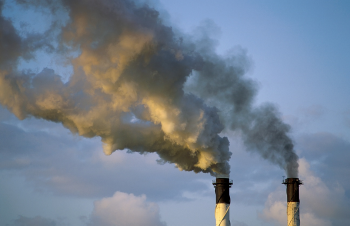 Scientists from the University of Southern California have managed to convert CO2 from the atmosphere into usable methanol fuel.

A new study shows how both the world's pollution problems and fuel shortages could be solved with what amounts to some chemical sleight of hand. Imagine the classic "what's that behind your ear?" trick - now, instead of your ear, you have the atmosphere, and instead of a shiny nickel, you've got pure methanol. That may have ruined your sixth birthday party, but it could also save the planet. So stop crying and eat your cake.

Researchers from the University of Southern California, including Nobel laureate George A. Olah, have managed to do just that: they can pull CO2 directly from the air, and convert it quickly and efficiently into methanol.

Methanol has lots of uses. As fuel, it is an alternative to gasoline, and as a building block it contributes to some of the most widely-produced organic compounds - ethylene and propylene - which go into plastics, among other products.

The trick to the new process is in the catalyst that allows the transformation to take place. The conversion requires high temperatures (about 150 degrees Celsius, or 300F), and previously-attempted catalysts have broken down under the heat. Enter the metal ruthenium: its stability under fire allow it to catalyse the reaction, while sticking around to be used over and over again.

All this seems pretty cool. I'm going to go produce some CO2 right now, actually, just to make sure we have a big supply ready when this technology is brought to market.