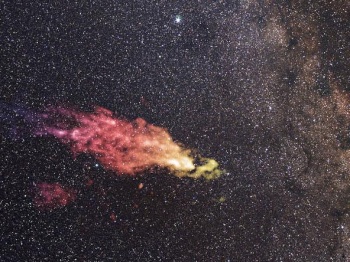 A 9800-light-year-long gas cloud is coming our way, and could form up to two million new stars when it finally collides with our galaxy.

On a cosmic scale, it seems the Milky Way Galaxy has made its bed of cosmic dust, and now it has to lie in it. New research proves that the Smith Cloud, an immense body of gas hovering just outside our galaxy, was actually expelled by this same Milky Way not 70 million years ago - and that cloud is rushing back towards us at about 193 miles per second.

Astronomers have long wondered about the origins of the Smith High-velocity Cloud, since its discovery in 1963. Some proposed it may have been a starless galaxy, which was a concept I had never given thought to until just now, but am incredibly fascinated by.

Careful observation through the Hubble telescope has revealed the cloud's parentage. By examining the light from distant galaxies is refracted as it passes through, astronomers were able to get a good idea as to its chemical makeup. Sulphur seems to be the number one ingredient, in such an amount as to confirm it came from our own sulphurous home.

In about 30 million years, the gas cloud will make its return visit, lighting up the sky with new stars formed in its wake. Judging by its 9800-light-year length, it could produce up to two million such starlets.

No one knows by which mechanism the cloud was ejected from our galaxy, but the scientists researching it believe gas recycling could be a common, if unseen, stage in the life cycles of galaxies.