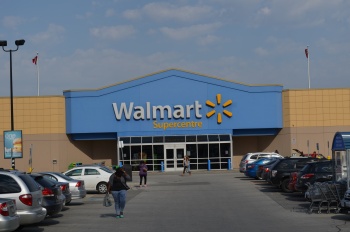 Walmart will try its hand at selling graphic novels in 50 American locations.

Love it or hate it, you can purchase almost anything at your local Walmart store, be it video games or gardening supplies. Comics and graphic novels, however, are a rare exception - one that might finally be changing. In a new partnership with Diamond Book Distributors, Walmart is creating dedicated graphic novel sections at 50 locations as a test drive for future comic expansions.

This news follows recent partnerships with Marvel and Viz, allowing the retail access to manga libraries and other collections. "[The Viz deal is] a great example of a lot of comics people working behind the scenes toward a much bigger project at Walmart," Diamond Vice President Kuo-Yu Liang explained. "Walmart wants to be a part of this. Manga is first but other graphic novels are coming."

So why is Walmart's partnership with Diamond a big deal? Simple: It's a major comic book distributor, operating on behalf of Image Comics, Dynamite, IDW Publishing, Valiant, and others. This automatically gives Walmart access to a huge graphic novel library, on top of whatever Marvel provides through its distributor Hachette.

And since this is Walmart, the move is already controversial for traditional comic shop owners. "You make a deal with Walmart, it's Walmart's deal. It's Walmart's terms," Wonderworld and Quick Stop Comics' Dennis Barger wrote. "You will be giving them a deal you'd never give the hard working brick and mortar retailers that have stood by you for 30+ years." Barger also predicts this deal will lead to huge losses for retailers in returns, and that Walmart will break agreements by selling books before official street dates.

Of course, this all depends on whether Walmart sells a substantial number of graphic novels during the test period. Regardless, fans and retailers alike will be paying close attention in the coming months.