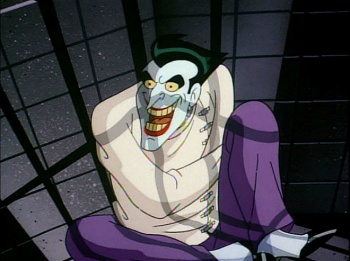 Kevin Conroy and Mark Hamill will reprise their roles as Batman and Joker for the Cartoon Network's Justice League Action.

We've seen many great Joker performances over the years, but few as memorable as Mark Hamill's. For over twenty years, his chilling laugh and dark sense of humor graced Batman: The Animated Series, Justice League, Arkham Asylum, and might even be featured in The Killing Joke. Now Hamill and Batman alumn Kevin Conroy are reuniting for a new DC animated series: The Cartoon Network's Justice League Action.

Justice League Action follows Batman, Superman, Wonder Woman, and a rotating cast of heroes who defend Earth from supervillains and alien invaders. As the title implies, action scenes are primary focus - each episode is only eleven minutes long, forcing the creative team to stick with tightly-paced adventures. Justice League Action will be the second ongoing DC Animated Series to debut on the Cartoon Network after Teen Titans Go!, but no launch date has been confirmed.

Outside of Conroy and Hamill, several other DC Animation veterans will return to the series. For example, the press release confirms that James Woods is Lex Luthor, while Diedrich Bader will play Booster Gold. But for many fans, simply putting Conroy and Hamill together sells the entire project. As far as I'm concerned, this pair are the definitive Batman and Joker voice actors, and I can't wait to what they produce. At least until Mark Hamill retires again.