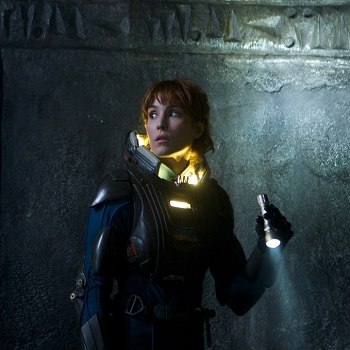 No word yet on whether the fate of her character, Elizabeth Shaw, will be revealed or not.

As it stands, we know next to nothing about Ridley Scott's planned Prometheus sequel/Alien prequel, Alien: Covenant, other than that it will have a "hard R rating." If you were to guess which previous Alien/Prometheus characters would be most likely to return in Covenant, however, one would imagine that Noomi Rapace's archeologist, Elizabeth Shaw, would be at the top of that list.

It would be a sensible prediction rooted in sound logic, being that Shaw was the only human left standing at the end of Prometheus, and therefore, the perfect character to connect the two films. As it just so happens, it would also be a wrong one.

In an interview with The Daily Mail published over the weekend, Scott dropped a bit of a bombshell by revealing that Rapace would not be returning as Shaw, adding that "We're still casting the main roles."

This means that Michael Fassbender's devious android, David, will be the only character from Prometheus set to return (in what will apparently be a double role for Fassbender). We also know that Katherine Waterston has been cast in the film, although her role has yet to be specified.

Ever since scoring a Golden Globe award for Best Director last month, Scott has been promising to deliver something "much worse" than the iconic chestburster scene in the original Alien -- a promise that many felt he already delivered on with Shaw's alien abortion scene in Prometheus -- so with Rapace now out of the mix, one has to imagine that Waterson's character might be on the short list of those who meet a grisly demise in Covenant. Let's hope that Scott is able to craft a better movie around said scene this time around, in any case.

The official synopsis for Alien: Covenant is below.

Ridley Scott returns to the universe he created in ALIEN with ALIEN: COVENANT, the second chapter in a prequel trilogy that began with PROMETHEUS - and connects directly to Scott's 1979 seminal work of science fiction. Bound for a remote planet on the far side of the galaxy, the crew of the colony ship Covenant discovers what they think is an uncharted paradise, but is actually a dark, dangerous world - whose sole inhabitant is the "synthetic" David (Michael Fassbender), survivor of the doomed Prometheus expedition.