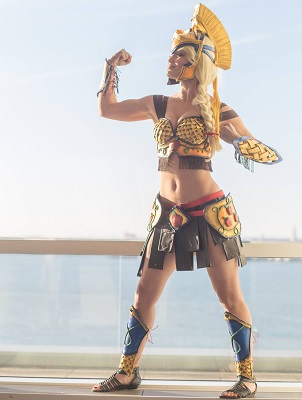 To call the fan base of My Little Pony dedicated would be an understatement. Extending across a wide range of ages and genders, the fans of the popular cartoon series have demonstrated their devotion in many ways and on many occasions. Some do so by writing fan-fiction. Some people express their love of Equestria with post-apocalyptic art. Others, meanwhile, pay tribute with works of creative cosplay.

Case in point, a group of cosplayers recently took it upon themselves to transform fan favorite ponies into "Princess Warriors." The ponies featured in the cosplay included mainstays like Applejack, Rainbow Dash, Twilight Sparkle, Fluttershy, Rarity, Pinkie Pie and more. The ponies were represented by the cosplayers KiraKira, Lua Suicide, Becka Noel, Hooked on Phoenix, PungoPungo, Dhareza Cosplayza, Joanna Mari, Lyz Brickley and Livia Chu. The cosplay session was photographed by the fine folks at Mineralblu Photography who revealed that the photoshoot, which took place at Katsucon 2016, only lasted about an hour. "[We] were fortunate to find a relatively empty hallway with lots of window light," they told The Escapist. "No additional light was used besides the sunlight coming through the windows and bouncing off the walls."

I'm going to go ahead and admit that I'm not personally a huge fan of My Little Pony. I watch it with my daughter but it's not something I'd generally choose to watch on my own time. That said, whether you're a hardcore MLP fan or not, there's no denying the clear amount of skill and effort that went into these costumes and the shoot that followed. Check them out and let us know what you think!