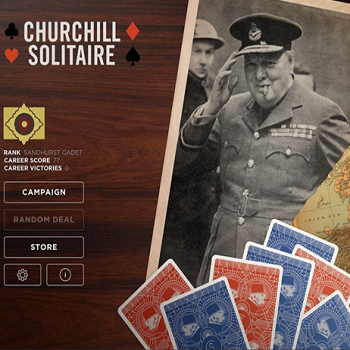 True to it's creator, it's been dubbed "the most diabolical version of solitaire ever devised."

If you're like me, you've probably spent a lot of your mental energy over the years pondering about the goings on of former Secretary of Defense Donald Rumsfeld. Is he keeping busy? Has he moved on to other business ventures? Are those business ventures video game based?

To put your worries at ease: the short answers to those questions are yes, yes, and you bet your ass they are!

Believe it or not, the 83-year-old Rumsfeld has apparently been shifting his focus from politics to mobile app development in recent years, and has just released his first game: Churchill Solitaire.

"It's a card game that can frustrate even the most skilled player because a single move can make or break an entire game." described Rumsfeld in a developer essay on Medium.

"A number of hands are simply unwinnable. But the most steadfast players will gamely soldier on to find their way to victory."

And the early reviews for Churchill Solitaire? Well, they're mixed to say the least. Kotaku's rundown of the game noted the game's forced landscape perspective and cramped layout among the game's aesthetic errors, stating "The obstacle to building your columns is that they don't really fit on the phone screen. Shortly into my first game, Rumsfeld Solitaire warned me that I was getting too close to the edge, and advised me to rotate my device to get more room. It was Rumsfeld Solitaire, of course, that had chosen to put the phone in horizontal layout in the first place."

But the major issue with the game? Oh, only that it's apparently rigged:

Still, a fundamental error of design wasn't going to stop me. I played on, itty-bitty cards and all, and as I did so, an understated fact about the game became clear: It's rigged.

It has to be, by design. There are difficulty levels. The only way to set a solitaire game at different levels of difficulty is to stack the deck. The only way out was to spend more time, or start spending money, on something that was never really going to work out.

So if you're looking for a nearly-impossible mobile app game that requires "the pessimism of intelligence and the optimism of will," head over to the game's official page to download the free trial version for iOS devices (sorry Android users) today!