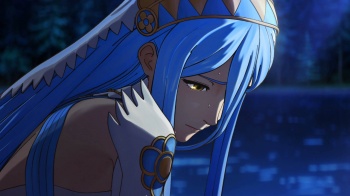 The western release of Fire Emblem Fates won't have the option to use Japanese voices like Fire Emblem Awakening.

Another week, another thing cut from the western release of Fire Emblem Fates. This time it's not something pervy or controversial, but rather, the ability to switch between English and Japanese voices for the game's characters.

Nintendo confirmed to Polygon that the feature had been cut. Japanese voice options, which while not present in all western Fire Emblem releases, were included in Fate's immediate predecessor Fire Emblem Awakening. In Awakening, the Extras menu available on the title screen included an additional voice language option.

The reason Japanese voices worked in Fire Emblem were because all of the game's text is displayed as subtitles. It was a nice way for fans of Japanese to listen to the game's original voice actors - much in the same way that many anime fans prefer to watch anime in Japanese with subtitles, rather than dubbed into English.

Nintendo declined to comment any further on the reasoning for the removal, and did not say if the feature would be added back into the game as DLC at any point during the game's release. It did confirm that all three versions of Fates: Birthright, Conquest and Revelation would lack the feature.