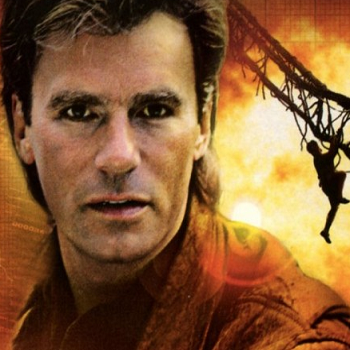 The mullet stays or we riot.

Everyone grab a piece of bubblegum, two toothpicks, and your trusty swiss army knife, because MacGyver is jury-rigging his way back to television.

Deadline passes along the word that the cult series, which enjoyed a seven season run between 1985 and 1992 and spawned a pair of TV movie sequels in 1994, will be receiving the ever-popular prequel reboot treatment on CBS. Fast and Furious 7 and Saw director James Wan will helm the project, which is being described as a "reimagining" of MacGyver, with original EP Henry Winkler and writer Paul Downs Colaizzo attached as well.

FYI, "reimagining" stands for "prequel," in this case.

The new series features a 10-years younger protagonist. Twentysomething Angus MacGyver gets recruited into the clandestine organization from the original series where he uses his knack for solving problems in unconventional ways to help prevent disasters from happening. The series is expected to chronicle how MacGyver acquired some of his famous skill sets.

And not only that, but CBS will then be teaming up with Lionsgate to produce a MacGyver movie. According to Variety, the movie will be produced by series creator Lee David Zlotoff and Neal Moritz, producer of The Fast and the Furious franchise.

Who will be stepping into Richard Dean Anderson's big and probably booby-trapped shoes? Is a mullet Renaissance finally upon us? Will MacGruber somehow be involved in all this? Not much has been revealed as of yet, but we'll let you know as the details are made available.