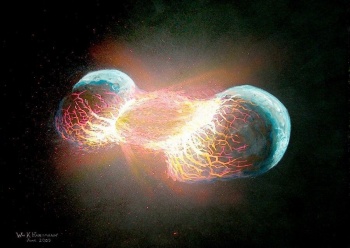 The long-standing theory on our moon's origin gains a heap of evidence - and a small twist - thanks to a study out of UCLA.

For an object that has inspired myth, poetry, and general reverence the way it has for all our history, the moon's origin is a little bit more Michael Bay than, say, Sylvia Plath. The consensus is that our favorite satellite was ripped from the Earth's own still-forming crust more than four billion years ago, after a devastating collision with another planetoid.

That consensus has been shaken up, somewhat, by a recent study out of the University of California in Los Angeles. Whereas scientists have once believed the initial crash was more like a side-swipe, the truth is more violent, and direct.

About four and a half billion years ago, the embryonic planet we now call "Theia" was simply minding its own business, circling our sun in an orbit that overlapped Earth's. Theia, named for the Greek titan who gave birth to the moon, may have been the same size as Earth or slightly smaller. It smashed head-on into its sister planet, sending fragments into orbit that would coalesce into the moon.

In the gallery below, you can see a close-up of the lunar rock, as well as paintings by scientist William K. Hartmann depicting the current theory (which looks like two planets undergoing mitosis) and the previously held one.

This new theory comes about after the chemical makeup of lunar rocks and the Earth's crust was compared by scientists at UCLA. They were looking at oxygen isotopes - each planet in the solar system has its own ratio of oxygen-18 isotopes to oxygen-19. Earth's is about 99.9% oxygen-18, and so is the moon's.

"We don't see any difference between the Earth's and the moon's oxygen isotopes; they're indistinguishable," says Edward Young, lead author of the study.

If the cataclysm that birthed the moon was a glancing blow, as we used to think, we would expect those ratios to be very different.

"Theia was thoroughly mixed into both the Earth and the moon, and evenly dispersed between them," says Young. "This explains why we don't see a different signature of Theia in the moon versus the Earth."

That's a nice way to end this story, really. Theia, the planet, was destroyed; yet there remains some Theia in all of us. Maybe some Plath is still appropriate: something beautiful, but annihilating, indeed.