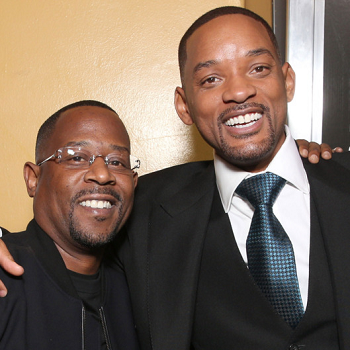 Without Michael Bay at the helm, can he and Martin Lawrence recapture the magic of he first two installments?

He might've missed the boat on Independence Day -- or simply been too expensive a package for the boat to handle -- but it looks like Will Smith will be tapping into our nostalgia to dust off an oldie after all.

In a recent interview with BBC Radio 1Xtra (video below), the Concussion star confirmed rumors that he would returning to the role that made him an action movie staple, Detective Mike Lowrey, for a third Bad Boys movie. Smith claimed the idea was spurred by a chance run-in with his former Bad Boys co-star, comedian Martin Lawrence.

"I hadn't seen him for about two years, and we just looked at each other," said Smith.

"We hugged and in that moment we both knew we were making another Bad Boys. So we're definitely doing another one."

Directed by Michael Bay, the first Bad Boys was released in 1995 to middling reviews, but earned over $140 million on a modest $19 million budget thanks in a large part to the chemistry of its leads. The 2003 follow-up was critically panned across the board as "two and a half hours of explosions and witless banter," but went on to outearn its predecessor by over $100 million (albeit with a budget to match).

In any case, I don't see many Will Smith fans being more excited to see him another Bad Boys movie instead of the incredible-looking Independence Day: Resurgence, let alone the *two* back-to-back Bad Boys sequels that are currently listed on Smith's IMDB page. Then again, Smith is about due for another blockbuster, and maybe rumored director Joe Carnahan (The Grey) can bring some fresh ideas to the table beyond Bay's plethora of explosions.

Bad Boys 3 has yet to begin production, but is already scheduled for a February 17th, 2017 release date.