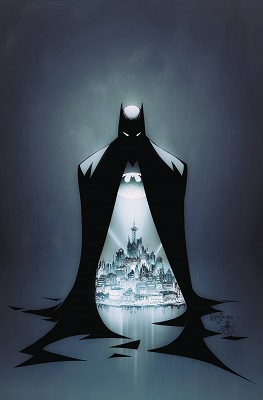 Scott Snyder will end his multi-year Batman with issue 51 this April.

With few exceptions, Batman is probably one of the most difficult superheroes to write well. Weighed down by a complex history and shackled to a large and dedicated fanbase that often expects very specific things from him, he's a character with heavy baggage. It's hard not to have at least a bit of admiration for writer Scott Snyder, in turn. Taking the reins of the Bat-verse back in 2011, he's spent the years since producing a string of Bat-stories ranging in quality from solid to bloody brilliant. Sadly, it's been confirmed that his reign as the guiding hand of Gotham will soon be coming to an end.

Speaking in a recent interview, Snyder revealed that April's Batman issue 51 will be the last produced by his and artist Greg Capullo's long-running collaboration. "[Batman 51] is really just a letter to the fans from us," He said. "It's the lightest I've ever written. Not the lightest as in happy, but light as in not as many panels per page. It's really, really open. It's a chance for Greg to draw the close before we take our break." Snyder would go on to say 51 will be a huge contrast to next month's Batman 50 which he claimed will be "the most explosive, jam-packed sort of blockbuster crazed issue we've ever done." Batman 51 will land in comic stores on April 13th.

While Snyder is finishing up Batman, it's possible he might not be done with the Caped Crusader altogether. Rumors have insinuated that Snyder might be hopping over to Batman sister series Detective Comics. Mind you, neither DC or Snyder has given any indicator that these rumors are true, but it's understandable why some would be hopeful. While some of his Batman writing (Court of Owls, Death of the Family) has definitely been better than other portions (Year Zero), Snyder's work has, overall, been excellent. Suffice it to say we'll be interested to see what he does with his next DC project.