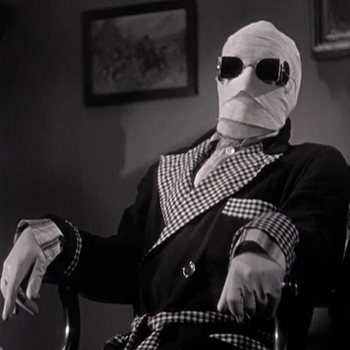 How Depp is supposed to pull off all those goofy reaction faces without an actual face, nobody knows.

Back in November, Universal announced plans to resurrect a bunch of its classic movie monsters for an entirely new line of reboots. The idea was to mimic the strategy that every other movie studio has been taking with comic book and superhero properties -- modern settings, contemporary themes, shared universes -- and simply apply it to a non-comic book property.

It's a good idea, in theory, in that it would both separate Universal from the pack and give casual moviegoing audiences what they want (the same thing they've already seen before). Unfortunately, recent history would seem to indicate that the only thing audiences *don't* want more of is modern retellings of classic monster movies. Dracula Untold, Victor Frankenstein, I, Frankenstein (which is both a comic *and* a modern retelling), The Wolfman...this is not a list of movies that have performed well at the box office over the years.

Then again, neither is Mortdecai, Tusk, or Transcendence, so maybe Universal is hoping that two negatives will cancel each other out when Johnny Depp stars in their upcoming remake of The Invisible Man.

Per Deadline, Depp is set to play Dr. Jack Griffin in a remake of the 1933 classic due out in 2018. The role, which sees a brilliant scientist discovery invisibility at the cost of his sanity, was previously inhabited by the legendary Claude Rains in his American screen debut (and Kevin Bacon after that, in a loose remake that was *also* a flop, come to think of it).

No director has been named for the project yet, but Men in Black and Now You See Me writer Ed Solomon will reportedly pen the script.

With Depp signed on for The Invisible man and Tom Cruise locked in for a remake of The Mummy, and Angelina Jolie being rumored to join them as The Bride of Frankenstein, it looks like Universal will be also be mirroring the Marvel strategy of reeling in as many A-listers as possible, so you'd have to imagine that this round of monster movie remakes has a slightly better chance at success than what's come before them.

My only question is, how is Depp supposed to remain invisible while wearing all those scarves, hats, leather bracelets, bolo ties, and handkerchiefs? He's going to look like a floating Aerosmith concert!