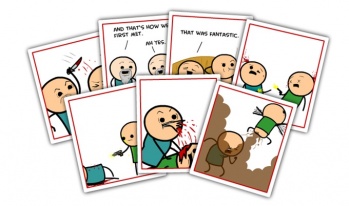 After the success of their Random Comic Generator, the guys behind Cyanide & Happiness have designed a card game with the same premise: build your own comic strip.

The war of the webcomics is upon us. On the battlefield of Kickstarter, Cyanide & Happiness is seeking to surpass The Oatmeal's record-breaking exploding kittens, and also The Oatmeal's Exploding Kittens card game. C&H's weapon of choice is Joking Hazard, a card game in the vein of Apples to Apples and Cards Against Humanity that has you constructing your own comic strips.

The team from Explosm.net were driven to create the game after the success of their Random Comic Generator, which in turn was inspired by a fan telling them that "making stick figure comics on the internet is easy as hell." So now everyone can do it.

Explosm's webomic has been around since 2005 and oh man I just got the "Joking Hazard" joke! Anyways, they're an internet staple. To say their brand of humor is irreverent is to use a multisyllabic word. It's not for everyone - frequent subjects are sex, death, farts, and violence; more often than not, all four at once. Frankly, it's my kind of funny.

In Joking Hazard - ha! - players take turn being the judge for the round, drawing one card from the deck. They then take a card from their own hand to use as the second panel. Finally, it's up the other players to try and find the funniest possible third panel for their broken, horrible creation.

The question on peoples' minds is, "will this surpass" Explodig Kittens? The Oatmeal's Kickstarter campaign generated more than eight million dollars in pledges. Right now, Kiqtrack is telling us Joking Hazard is heading for the five million dollars mark, though we can't predict the last few days of the campaign, which are often the most crucial for revenue.

I just spent a lot of time I should have spent working just clicking mindlessly on that "Generate New Comic" button, so I am forced to suppose this is a game I will probably enjoy. What about the Escapists out there?