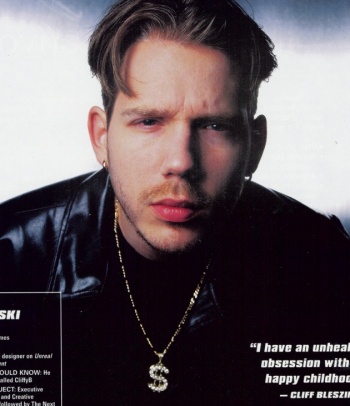 And you thought that Kojima/del Toro pairing came out of left field.

Hideo Kojima collaborating with Guillermo del Toro and Junji Ito on a Silent Hill game was the kind of news that forced horror fans into cold showers en masse. It's not happening, of course, because Konami is strictly averse to positive publicity and Hideo Kojima managed to escape the publisher's development compound during the launch of MGSV.

It's all very tragic.

While teaming up with del Toro was certainly unexpected, apparently Kojima had an even weirder pairing in mind before he approached the Pan's Labyrinth and Pacific Rim director: He wanted Cliff Bleszinski.

He of Gears of War and Unreal fame. Seen above at the tender age of 25.

Yep. According to a tweet from Cliffy B (he will forever be Cliffy B to me), Kojima approached him about making "a new Silent Hill game." He declined because he didn't want to move to LA where the game would be produced, and because wanted to work on new IP.

"I woulda fucked up SH," he added.

While some of you might be silently mouthing the words "what," and "the," followed by an expletive of choice, I can actually see why Kojima might tap Cliffy for the project. While it's largely remembered for its chunky cover system, frenetic multiplayer and the holy union between chainsaw and gun, the original Gears of War was absolutely dripping with atmosphere in the rare moments when it slowed down and let its art and sound design do the talking. That being said, Bleszinski is definitely a shooter kind of guy, and the quality of a givenSilent Hill game seems almost inversely proportional to the quality of its shooting, so it's probably a good thing he passed on the project.

Kojima has stated he'd still like to work with del Toro now that he's founded his own production company, Kojima productions.

Critical Miss: The Vaguely Familiar Evil Within The Wooster 32 Comments