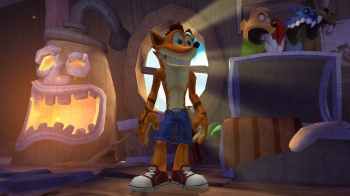 Here's some good news for fans of old-school 3D platformers: Sony's sort-of mascot Crash Bandicoot may be making a comeback. At New York Toy Fair 2016, prominent toy maker NECA made an off-handed comment suggesting the bandicoot will be returning to the PlayStation some time in the near future.

We've got a lot of stuff going on with Sony," NECA Director of Development Randy Falk told YouTuber PixelDan. He spoke of upcoming toys in the God of War, Uncharted and LittleBigPlanet franchises, before very briefly stating "Looking at some of their other titles, I see that they're bringing Crash Bandicoot back ..."

Falk didn't offer any further explanation or follow-up to his Crash Bandicoot comment, so I'm afraid that's all we have to go on for now. His comment could be referring to a full-blown comeback in the form of new Crash Bandicoot games, but it also could simply be Sony leveraging the franchise by including him in existing games or merchandise.

Crash Bandicoot was originally created by Naughty Dog, who have now made a name for themselves with the Uncharted franchise, and the awarding-winning The Last of Us. He made his debut on the original PlayStation, and served as a kind of "mascot" character for Sony, back in the days where anthropomorphic animal mascots were cool.

The last Crash Bandicoot game to be released was Crash: Mind over Mutant in 2007 for the PlayStation 2.