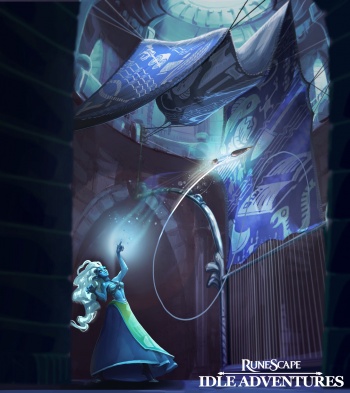 RuneScape: Idle Adventures wants to pack all the narrative, quests, and skillbuilding of an RPG into an idle game playable over two-minute sittings.

Narrative RPGs are among my favorite video games, but I have to admit - it's hard to find the 30-50 hours required to finish one. Thankfully, Jagex and Hyper Hippo may have an elegant solution with RuneScape: Idle Adventures. Set in the RuneScape universe, this newly announced game aims to combine RPG mechanics with idle games, allowing for stories players can work on within a few minutes each day.

In RuneScape: Idle Adventures, players create a World Guardian with ties to the Needle, a newly revealed artifact in the RuneScape setting. This new character's goal is to nurture the world by completing quests, joining factions, fighting monsters - or simply fishing and growing cabbage. Rather than finishing objectives through marathon sessions, you'll assign tasks which your character works on while offline. Once you return, your World Guardian will have advanced the narrative and developed along various skill tracks.

RuneScape: Idle Adventures will also be the first RuneScape project to be created by a third party: Hyper Hippo, the Canadian dev team behind AdVenture Capitalist. "We're huge fans of RuneScape and have great respect for its lore and heritage," Hyper Hippo CEO Lance Priebe said in a statement. "By working closely together with the amazing storytellers at Jagex, we believe Runescape: Idle Adventures brings a depth to idle games that will be a game changer."

Jagex and Hyper Hippo didn't have any gameplay footage to show at a recent press event, but did talk about how its gameplay and story would function. In short, Idle Adventures is described as a 0.5-player game, where you make crucial choices and RPG systems crunch the results in the background. Players will be able to choose where to explore, which skills to advance, and make certain story decisions, without needing to dedicate countless hours to grind-based gameplay. What's more, Idle Adventures story will be inspired by and loop back into RuneScape's lore, influencing the core game in ways that won't be revealed until future updates.

If it works as advertised it could be a promising game for RPG players with little time on their hands. Either way, we won't have to wait long to see its potential fulfilled: RuneScape: Idle Adventures launches on Steam this Spring, with mobile and tablet editions following shortly after.