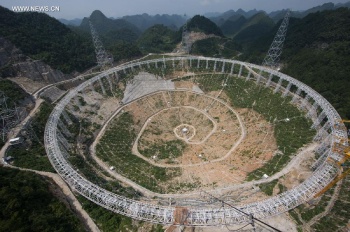 As China constructs the world's largest-ever radio telescope, the government is relocating 9000 villagers to make room for the device which will primarily look for extraterrestrial signals.

While China's new telescope is hunting extraterrestrial life, some people back on Earth are going to be wondering just where they are to live.

As the Chinese government continues construction of FAST, short for "500-meter aperture spherical telescope", they've announced the mass relocation of about 9,000 villagers in the facility's vicinity. Xinhua says this is necessary to create a sound electromagnetic environment for the telescope to operate in.

Guizhou, the site of FAST, is one of China's poorest provinces; the residences being moved are to be given about $1,800 in compensation. The telescope costs $182 million.

When FAST is complete and operational in September of 2016, it will be the largest-ever radio telescope on Earth. Among its duties will be scanning the skies for information on the many cosmic phenomena out there - not to mention, listening closely for any sentient whispers from out in the black.

For years, SETI has had to rely on borrowing time from other telescopes such as the Arecibo dish, or scanning second-hand data from other projects. "With a larger signal receiving area and more flexibility, FAST will be able to scan two times more sky area than Arecibo, with three to five times higher sensitivity," says Li Di, a chief scientists with China's National Astronomical Observatories.

"Ultimately," he went on, "exploring the unknown is the nature of mankind."