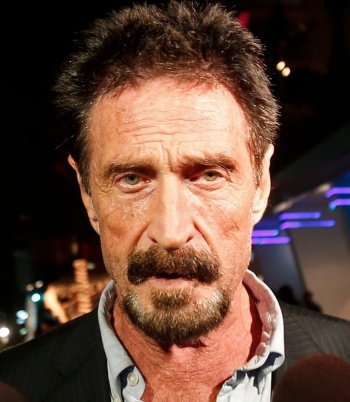 John McAfee says his team of expert hackers will break into the San Bernardino phone, free of charge, to prevent the creation of a backdoor that will lead to the downfall of America.

Apple creating a backdoor for the iPhone will be the end of America. At least, according to John McAfee, cybersecurity expert, Libertarian presidential candidate, and quintessential eccentric millionaire. The smart solution, he says, is just to let him hack the phone. Don't worry, FBI - I got this.

What began as a an attempt to extract evidence from the phone of the San Bernardino shooter may have evolved into a decision on the future of cybersecurity, and preservation of American liberties - not to mention, America itself.

Apple's Tim Cook opposed the order from the FBI to create a backdoor for their smart phone. The potential software "would have the potential to unlock any iPhone in someone's physical possession," and though the FBI insists they would only use it once and only for this phone, it would set a dangerous precedent - not to mention, there is no way of guaranteeing that "once" part.

McAfee takes it several sprinting steps further. In a statement to Business Insider, he likens the creation of a backdoor to a pre-emptive surrender in an eventual cyber war.

Says McAfee: "This is a black day and the beginning of the end of the US as a world power. The government has ordered a disarmament of our already ancient cybersecurity and cyberdefense systems, and it is asking us to take a walk into that near horizon where cyberwar is unquestionably waiting, with nothing more than harsh words as a weapon and the hope that our enemies will take pity at our unarmed condition and treat us fairly."

"No matter how you slice this pie, if the government succeeds in getting this back door, it will eventually get a back door into all encryption, and our world, as we know it, is over. In spite of the FBI's claim that it would protect the back door, we all know that's impossible. There are bad apples everywhere, and there only needs to be [one] in the US government. Then a few million dollars, some beautiful women (or men), and a yacht trip to the Caribbean might be all it takes for our enemies to have full access to our secrets."

Why is the U.S. so behind on cybersecurity? "Because the FBI will not hire anyone with a 24-inch purple mohawk, 10-gauge ear piercings, and a tattooed face who demands to smoke weed while working and won't work for less than a half-million dollars a year. But you bet your ass that the Chinese and Russians are hiring similar people with similar demands and have been for many years. It's why we are decades behind in the cyber race."

But Apple and the United States need not worry - McAfee has assembled the best team of hackers on the planet. "I will, free of charge, decrypt the information on the San Bernardino phone, with my team. We will primarily use social engineering, and it will take us three weeks." That's quite the offer.

He also suggests that any doubters can google "cybersecurity legend" to see whose name comes up in the top ten results (it checks out), but really that just means he's good at SEO.

McAfee is a strange guy, sure, but it's hard to say he's entirely wrong about the backdoor program. Of course, should the FBI simply hand over the phone to him, well... let's hear what the Escapists have to say about that.