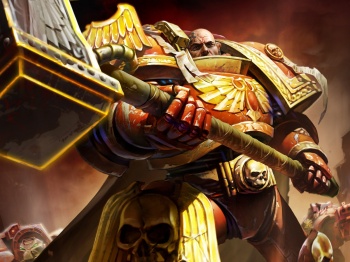 Games Workshop and Titan Comics have partnered to develop an ongoing comic series in the Warhammer 40,000 universe.

Warhammer 40,000 is well known for its tabletop line, licensed video games, and a setting which literally inspired the phrase "grimdark". Yet since its inception in 1987, the one thing it hasn't received was its own comic line. That will finally change this September, thanks to a partnership between Games Workshop and Titan Comics which will depict the battles of Space Marines, Orks, and Chaos daemons.

Warhammer 40,000 is set in a dystopian 41st millenium, where the Imperium of Man rules the galaxy under the authority of the God-Emperor. But despite its best efforts, the Imperium is edging closer to collapse thanks to corruption and unending wars. In the meantime, its power-armored space marines fight for the Emperpor against every alien race in the galaxy.

"Whether it's the iconic, power-armor-encased Space Marines holding the line against unspeakable forces of xenos," Titan Comics press release reads, "the frothing, Daemonic intensity of Chaos, corrupting all they touch; the squabbling, bodged-together Orks, riding roughshod over far-flung colonies; the exotic, long-lived Eldar wielding rare weaponry and rarer insight; the idealistic, mech-piloting forces of the Tau; the undying, endoskeletal hordes of the Necrons, or the starving forces of unnature, like the Tyranids, spitting death and destruction with every spurt of their chitinous cannons, the Warhammer 40,000 setting offers horrifying surprises and stunning sights at every turn - and the comics will explore them all!"

The Warhammer 40,000 universe has grown substantially over the past 30 years, creating lots of room for an ongoing comic stories. What's not yet clear is whether the new series will follow a specific band of marines, or will individual stories from the perspective of each race. Either way, Titan Comics' press release notes this will be the first Warhammer 40,000 series - meaning other mini-series and crossover events will likely follow.