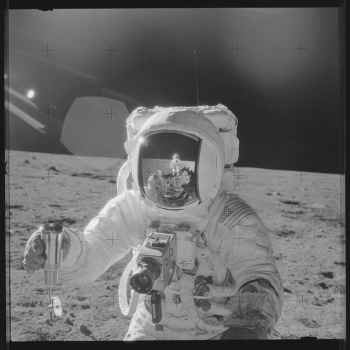 More than 18,000 would-be astronauts are fighting for between eight and fourteen slots.

Between mid-December and February 18th, 2016, NASA received about 18,300 applications to join the astronaut program. That is a lot of potential job-seekers vying for one of the eight to fourteen open positions.

So what they're telling me is I still have a chance.

That huge number of applicants is more than three times as many as the space agency received during its last round of hiring, three years ago.

What accounts for the sudden surge? That likely has to do with a renewed public interest in space in the last few years, propelled by scientist celebrities. 2014 saw Neil DeGrasse Tyson's rebooted Cosmos series hit television to acclaim; Commander Chris Hadfield, "Everybody's Favourite Canadian," contributed with his frequent transmissions from on board the International Space Station.

NASA's Selection Board will review every application and interview the top candidates in the next 18 months. Come 2017, we'll know who made it and then the lucky few will begin training to crew the ISS or any of the other space vehicles in service.

Meanwhile, those of us waiting for a "Deep Space Homer" situation to arise will be watching from back here on Earth. If you'll excuse me, I've really got to brush up on my Russian...