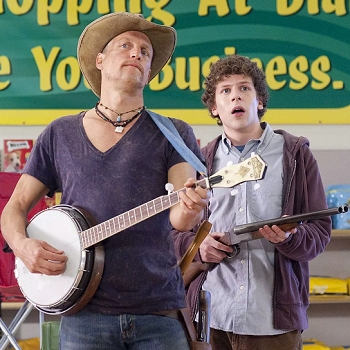 The only important question now is: WILL BILL MURRAY BE IN IT?

In an era of filmmaking almost entirely based around franchises, it's nothing short of confounding to see that 2009's Zombieland has yet to receive a sequel. I mean, a movie about bank robbing magicians is getting a sequel*, so you'd think that *any* movie about zombies (which are hotter than Hansel at the moment) would be churning out sequels left and right, let alone one as successful as Zombieland. Aside from being a critical hit, Zombieland was one of those rare comedies that managed to make over 100 million dollars and still maintain the "cult" appeal that studios seem to care about so much these days.

On the other hand, hearing that the pilot for Amazon's failed Zombieland television series was "hated out of existence" by fans of the movie despite having most of the same talent involved might indicate that the movie was more of a lightning-in-a-bottle scenario than we might have expected -- for every Shaun of the Dead, there are a dozen Scout's Guide to the Apocalypses', after all.

With the success of Deadpool being the talk of the town, however, it looks like screenwriters Rhett Reese and Paul Wernick might finally have the momentum to deliver on what they've been promising for years: A Zombieland sequel.

In a recent interview taken while making the promotional rounds for Deadpool, Reese and Wernick revealed that the long-awaited sequel is still in development. Development hell, that is, but still!

"It's actually still in development at Sony, they've had a couple writers take a crack at it, we're still exec producers and we're guiding and helping where we can and I think there's still very much talk about it, but I think it has to be right," said Reese.

"I think all the actors and (original 'Zombieland' director) Ruben (Fleischer), all feel like there's no reason to do it again if we're not getting it exactly right."

Say what you want about this Rhett Reese character, but the guy has an admirable restraint so rarely demonstrated in the age of Olympus Has Fallen 2 and The Purge 3. Somewhat contrarily, I'm all for the idea of a Zombieland sequel. It seems like a hard idea to mess up with the right talent, recent history notwithstanding, and it's not like Columbia would have to break the bank making another one. Now that Abigail Breslin is at least 16 (I'm not looking it up), I say you take Z2 in the Deadpool direction and fill this thing up with R-rated potty-mouth humor and graphic violence. Everyone wins.

*Disclaimer: I actually quite enjoyed Now You See Me, but the point remains: Movies about magicians need to be few and far between.

Arrow in the Head