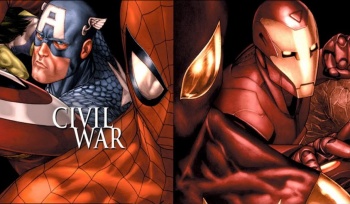 While he's not in the trailers yet, Spider-Man will have a potentially crucial role to play in Captain America: Civil War.

We're getting ever closer to Captain America: Civil War's release date, with all the tense superhero combat it entails. What we haven't heard about, however, is what role Tom Holland's Spider-Man will have in the story. Given Spider-Man's prominence in the Civil War comic book, it should be fairly important. Now Empire Magazine has published a barebones description of Spider-Man's presence, backed by Civil War co-director Joe Russo himself.

According to Empire's latest issue, Spider-Man "comes in after the battle lines have been drawn and forms a relationship with one character who the Russos, for now, won't identify". The most likely candidate for this relationship is Tony Stark, Peter Parker's employer during the Civil War series. Stark even equipped Parker with an Iron Spider-Man costume, although we're not likely to see that in the film's runtime.

That's not to say Marvel's Civil War movie won't change the formula - it's already dropped the original Superhero Registration Act, after all. Spider-Man could just as easily ally with Captain America, Nick Fury, or Vision for all we know. My personal hope is he'll consider the whole conflict pointless, and try to break up that Cap vs. Iron Man battle from the trailers. Which is certainly something Peter Parker would do.

Still, given how excited fans are for the MCU Spider-Man, you can expect he'll leave an impression. "Tom's unbelievable," Joe Russo said. "We're very excited to present our version of Spider-Man to the world."