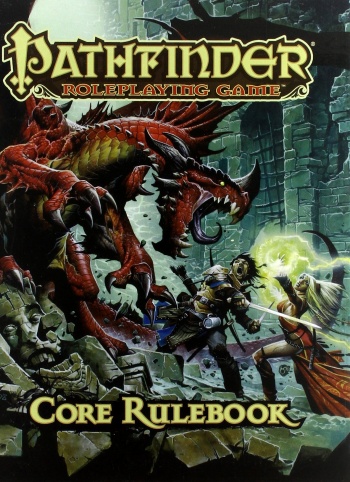 Humble Bundle and Paizo have partnered to offer an absolutely enormous collection of Pathfinder RPG books.

Humble Bundle has offered several discounted RPGs over the years, but never any of the tabletop variety. That just changed in a big way thanks to Paizo, who are offering an amazing Pathfinder collection to Humble customers. For $15 dollars, you can snatch up over 20 Pathfinder PDFs covering almost the entire line - from the core book, to GM supplements, to adventures.

For those unfamiliar with tabletop RPGs, Pathfinder is one of the biggest fantasy games next to Dungeons & Dragons itself. In fact, Pathfinder started out as a modified D&D ruleset fans could play once the 3.5 edition left print. In the process, it gained a massive following that didn't care for D&D's 4th edition, and quickly became one of the industry's biggest success stories.

If I were to describe every single Pathfinder book in this bundle, it would take multiple paragraphs, so let's stick to broad strokes: The Humble RPG Book Bundle covers just about everything you'd ever need for a Pathfinder campaign. Along with the Core Rulebook, there's a Game Mastery Guide, advanced class and player supplements, adventures, and more. Paizo even threw in guides to Pathfinder's Golarion campaign setting, specialized "Ultimate" books, and two complete Bestiaries of monsters.

On top of that, Humble Bundle will include a physical Pathfinder Roleplaying Game Beginner Box for anyone who pays $25. (A digital version is included in the base set.) Customers also have the option to donate any portion of their payment to the Extra Life children's hospital charity. Either way, this is an incredible deal for any tabletop RPG fan. Whether you're just learning to play RPGs, or a long-time Pathfinder player, you can't go wrong with this bundle.