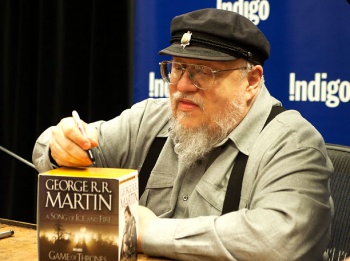 When The Winds of Winter finally launches, it will have a plot twist for a character HBO's Game of Thrones - not George R.R. Martin - killed off.

It's no secret HBO's Game of Thrones made several changes to George R.R. Martin's A Song of Ice and Fire, a trend which will absolutely continue in Season 6. Yet it seems the latest novel - The Winds of Winter - will widen that gap farther than we expected. While Martin couldn't share spoilers, he did confirm The Winds of Winter has a major plot twist involving a character HBO killed in a previous season.

"I have decided to do that, yes," Martin said, referencing last year's vague statements that this twist was a possibility. "Will you know it? I don't know. It's fairly obvious, because it's something that involves a couple of characters, one of whom is dead on the show, but not dead in the books. So, the show can't do this, unfortunately, because they've killed a character that I have not killed.

"But that doesn't narrow it down much," he continues, "because at this point, there are like, fifteen characters who are dead in the show who are still alive in the books."

Naturally, this will get the internet speculation machine running in no time, and raises the question of whether HBO will have its own version of the twist. Depending on what exactly happens, another figure could possibly fill the deceased character's role. Either way, it's just another reason to look forward to both versions of the critically-acclaimed fantasy series.

The really interesting part to me is these lore changes aren't uncommon historically. There are countless variations on, say, the King Arthur myths which developed over the course of generations. With Game of Thrones, we actually have the chance to watch them grow in real-time, and it's going to be fascinating to watch where all these characters end up.

Related to:
marshall lemon, a song of ice and fire, game of thrones, george rr martin, hbo, movies and tv, the winds of winter
0
Tweet