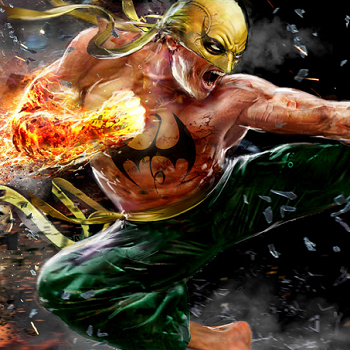 Netflix's Iron Fist has seen some ups and downs since it was first announced all the way back in 2013. For a while there, it seemed as if the series would be one of the rare Marvel properties to *not* make it past the production stages -- or at least, be scrapped in favor of a movie. Then, it was announced back in December that Marvel would be moving ahead with an Iron Fist series, which would hit Netflix sometime after its other upcoming superhero show, Luke Cage, made his solo debut.

In fact, none other than Luke Cage himself (Mike Colter) told Collider back in January that an actor had already been cast in the role of Daniel Rand/Iron Fist, leading to widespread speculation across the Twitters, Youtubes, and Facebooks. Would it be one of the five options we presented them with? Would it be a young, unheralded actor that Marvel typically casts in such a role? WOULD IT BE THE RZA?

The short answers to those questions, as it turns out, is no, sort of, and sadly no.

According to Variety, Marvel has cast Finn Jones -- or as he's known to Game of Thrones fans, Ser Loras Tyrell -- in the titular role, following an audition that Guy Fieri would likely describe as "out of bounds."

It's a conventional, if not somewhat underwhelming casting choice considering that the character's father hailed from the city of K'un-L'un, whose inhabitants were widely depicted as Asian. At the same time, Marvel has had an almost flawless track record when it comes to casting their superheroes thus far, so if they were really that impressed by Jones, perhaps he truly is the best choice for the role.

No word yet on when Iron Fist is set to begin principle photography, but we'll keep you updated as information is made available.