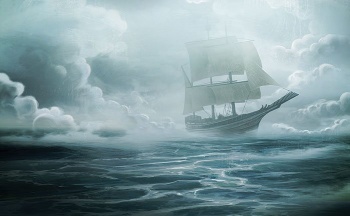 The latest expansion for The Lord of the Rings Card Game takes the player on a quest to the Grey Havens, aided by the legenday figure of Cirdan.

The Grey Havens region is scantly seen in J.R.R. Tolkien's epic Lord of the Rings trilogy - it is the place where we last see our main characters, as they in turn take the long sea journey to the Undying Lands. In the LoTR card game from Fantasy Flight, however, the Grey Havens are only the beginning of a new cycle of adventures that will take the players over the sea and into forgotten and dangerous waters, indeed.

The Grey Havens expansion is not only adding the legendary figure of Cirdan to the game's retinue of playable heroes, but also a fleet of ships that you will captain through its three quests (and the quests of the subsequent Dream-Chaser cycle of adventures). This is a first for the game, and includes some new mechanics - ships are powerful, but can only engage in combat with other ships; quests have sailing challenges, and failure risks putting you off-course, slowing your progress in a game where delay can be lethal.

Before moving on, the true LoTR nerds reading this may be wondering why Cirdan is given the "Noldor" trait, when he is, of course, "Teleri". The game's designers have said that this was to keep the number of different kinds of elves from getting out of hand, which is... well, it's fair, actually, especially considering that traits can have several mechanical implications in gameplay.

Don't worry, the designers are definitely fans of the lore first and foremost - even Cirdan's ring of power, Narya, may be granted to Gandalf, just as the ancient elf mariner handed the ring to the wizard in the books.

The expansion's cards are designed to synergize well with each other; many of them play off of cards in players' discard piles, with each of the two new heroes having abilities that let them voluntarily discard from their hand.

Also, the art is absurdly gorgeous. This is possibly the best-looking card game on the market right now.

So who out there is looking to board the Dream-Chaser? I am - actually, it'll be my first purchase after the game's core set. So... any advice would actually be very appreciated!