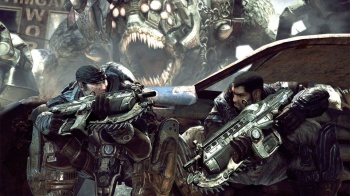 After months of silence, Gears of War Ultimate Edition is now available for purchase exclusively for Windows 10 via the Windows Store.

Microsoft wasn't kidding about its push to unify Xbox One and PC gaming: after months of silence, it has finally announced a release date for the PC version of Gears of War Ultimate Edition. Right now! That's right, you can now buy the game on the Windows store (and only on the Windows store).

The game will set you back $29.99 and is only available for Windows 10. This means that if you have any version of Windows below 10, or are using any other kind of app store (like Steam), you can't play the game.

The PC release comes a full six months after the original Xbox One release, but Microsoft promises some extra goodies for PC gamers. First and foremost: the game is much, much prettier on PC. Microsoft says that the Xbox One version of the game is only equivilant to "medium" settings on the PC, and support for 4K displays and unlocked refresh rates means those with PCs beefier than Marcus Fenix's pecs can get some glorious visuals.

Originally, Gears of War was released on the PC exclusively via the Games for Windows LIVE service. When the service closed down in 2013, there was no legitimate way for gamers to buy, or play the game on PC.

As a PSA: we warn you that various reports are floating around the internet suggesting that the game runs poorly on AMD cards. Purchase at your own risk!