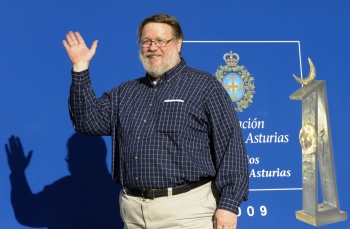 Tomlinson popularized the [email protected] format that has become the global standard for email addresses.

Email, or "Electronic Mail" really changed the way we communicated. Messages that could take days, weeks, or even months to be delivered could suddenly arrive in seconds. Today, we regret to report that Ray Tomlinson, the man credited with email's invention, has passed away of a suspected heart attack aged 74.

In 1971 Tomlinson, working on internet ancestor ARPANET, established the very first networked "email" system. What was particularly significant about Tomlinson's email is that he decided to use the @ symbol in his format, with emails being sent as "[email protected]". At the time, the @ symbol was a rather obscure mark, and didn't really have a lot of use.

During the early days of the internet, emails were sent in various different formats, but Tomlinson's eventually reigned victorious. His popularization of the @ symbol led to its use in today's social media - can you imagine Twitter without its ubiquitous @ mentions?

Tomlinson has been honored in the Internet hall of fame, and has received various awards for his service in the tech industry.

So let's all pour one out for Tomlinson, who has made it so most people never have to deal with the post office to send letters ever again.