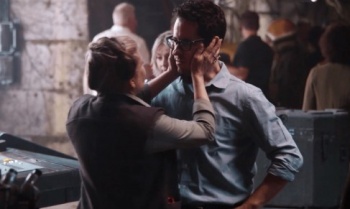 A common nitpick around General Leia concerns a scene near the end of the film, which Abrams has admitted was a mistake.

J.J. Abrams has admitted he "made a mistake" with Carrie Fisher's character: General Leia in The Force Awakens. The mistake concerns a scene near the end of the movie, and as such, is very heavily ridden with spoilers. If you haven't seen the movie, do yourself a favor and click the back button on your browser now.

To make it absolutely clear: Spoilers for Star Wars: The Force Awakens follow.

Okay? We good? The scene in question comes just after Han Solo's death. The resistance fighters return from Starkiller base with the good (and bad) news. Leia looks quite distraught - you can tell from her face that she already knows Han is dead, and looks to her friends for comfort. Inexplicably, she brushes off poor Chewbacca - a lifelong friend of both her and Han, and hugs Rey - who is practically a complete stranger.

"That was probably one of the mistakes I made in that," Abrams told Slashfilm. "My thinking at the time was that Chewbacca, despite the pain he was feeling, was focused on trying to save Finn and getting him taken care of. So I tried to have Chewbacca go off with him and focus on Rey, and then have Rey find Leia and Leia find Rey. The idea being that both of them being strong with the Force and never having met, would know about each other - that Leia would have been told about her beyond what we saw onscreen and Rey of course would have learned about Leia. And that reunion would be a meeting and a reunion all in one, and a sort of commiseration of their mutual loss."

However, he admits that "Had Chewbacca not been where he was, you probably wouldn't have thought of it. But because he was right there, passed by Leia, it felt almost like a slight, which was definitely not the intention."

So there you have it, straight from the director himself.