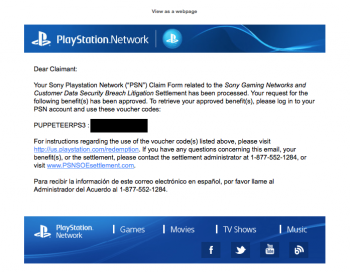 Remember that massive PSN breach back in 2011? Sony is finally getting around to sending out that promised compensation.

All the way back in 2011, there was an absolutely massive breach of Sony's PlayStation Network, resulting in the credit card information of thousands of users being compromised. It was a fuck-up of the nth degree, worsened by the fact that Sony reportedly sat on this information for a full week before telling users. It led to a class action lawsuit, and finally, Sony promising compensation for those affected as a result of the suit.

Well the good news is now, five years later, Sony is finally following through with its promise of compensation.

Shortly after the outage, Sony detailed its Welcome Back program, which would let all affected users choose two free games for each PS3 and PSP networks. However, there were a lot of holdups on Sony's end, and users were only able to actually start choosing their games four years later, from January of 2015. Now, a full five years after the breach, those game codes are finally being rolled out.

So for those of you who have been diligently awaiting your chance to play all of 2011's smash hits, like original Little Big Planet or Rain, your patience is about to pay off!

Eligible users will soon receive an email with their codes attached, much like the one you can see in the image above.

Seriously though, at this point, you have to wonder why they would even bother. The games are so old at this point that anyone who wanted to play them, probably has already. They should have just given everyone the equivalent dollar amount in PSN credit. This "two free games" thing is a slap in the face, but at least they actually went through with it!