Update (3:30 PM EST): In response to our inquiry about Landmark, we received the following statement from a Daybreak Games representative:

"In a statement to the community earlier today, Daybreak Games confirmed that development of EverQuest Next has been discontinued. If you haven't already, please read company president Russell Shanks' comments on how and why this decision was made.

Landmark will be launching this spring. Executive Producer Holly Longdale posted a letter about Landmark on the forums that has additional details."

So we can still expect to see Landmark as planned. That's a little bit of good news for fans of the franchise.

Original Post: Almost three years after its announcement, EverQuest Next has been cancelled by the Daybreak Game Company. 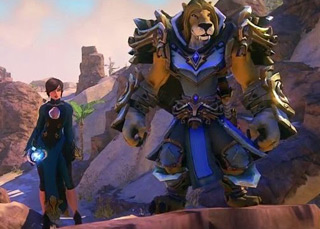 The announcement came today in a post on the company's official site. Daybreak Games president Russ Shanks made the cancellation official, and said that the main reason for it was that the developers "found that it wasn't fun." The game had been touted by Daybreak as the next evolution in the MMO genre and the EverQuest franchise.

EQ Next also spawned Landmark, a voxel-based world building tool that let players claim land, build structures, and even promised that some of the most impressive structures would appear in EQ Next. There's no word on the future of Landmark in this announcement, but we have reached out to Daybreak to find out what is happening on that front.

At any rate, the list of upcoming entries in the MMO genre just lost a highly recognizable title. You can't even look back at what might have been, as the official game site has already been taken offline.

You can read the full statement from Daybreak below.

To Our Daybreak Community,

I'm writing today to let you know that, after much review and consideration, Daybreak is discontinuing development of EverQuest Next.

For the past 20 years EverQuest has been a labor of love. What started as a deep passion of ours, as game creators, grew into a much larger passion shared by you, millions of players and Daybreakers alike. Watching EverQuest's ability to entertain and bring people together has inspired and humbled us. It's shaped our culture and has emboldened us to take aggressive risks with our game ideas and products. When we decided to create the next chapter in the EverQuest journey, we didn't aim low. We set out to make something revolutionary.

For those familiar with the internals of game development, you know that cancellations are a reality we must face from time to time. Inherent to the creative process are dreaming big, pushing hard and being brutally honest with where you land. In the case of EverQuest Next, we accomplished incredible feats that astonished industry insiders. Unfortunately, as we put together the pieces, we found that it wasn't fun. We know you have high standards when it comes to Norrath and we do too. In final review, we had to face the fact that EverQuest Next would not meet the expectations we - and all of you - have for the worlds of Norrath.

The future of the EverQuest franchise as a whole is important to us here at Daybreak. EverQuest in all its forms is near and dear to our hearts. EverQuest and EverQuest II are going strong. Rest assured that our passion to grow the world of EverQuest remains undiminished.