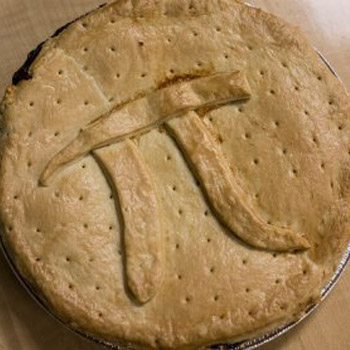 Today, March 14th, is Pi Day. People all across the country - and the globe - are celebrating pi, the transcendental number that is, of course, approximately 3.14.

The holiday was created back in the late 80s but became recognized by the US Congress as an official holiday on March 14, 2009. Though maybe not as popular as many other commercial holidays, it doesn't mean you can't have fun with it. How do you celebrate Pi Day?

Eat Pie
Obviously. Pi Day is traditionally celebrated by eating a pie. So head to the kitchen (or, better yet, your nearest pie shop) and have at it! Many bakeries and restaurants even have deals on pie on Pi Day.

Recite the digits of Pi
How far can you go when it comes to pi? Since pi never ends or repeats, it's fun to see how far you can memorize and recite the digits. Compete with your coworkers around the water cooler or your friends at the pub. It's sure to impress. 3.14159265359 and on and on and on.

Throw a party
March 14 isn't just Pi Day, it's also Albert Einstein's birthday (he would have turned 137 today, in case you were wondering) so it's a great day to throw a party. Wear Einstein costumes. Watch mathematical movies. And of course, eat the pie.

Brush up on your math
So, you don't have any geek friends to celebrate Pi Day with? That's okay. Head to the library and grab geometry and other math books to brush up on your skills. Yeah, that sounds really lame. Better yet, just eat some pie.