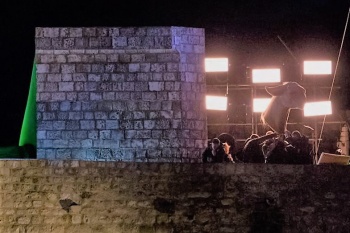 It really doesn't seem long ago that Star Wars: The Force Awakens was dominating the film world. Yet after giving everyone involved a few minutes to catch their breath, Episode VIII kicked off production with a reportedly fantastic script and a Dubrovnik filming location. That means the entire leaked Star Wars set photo game can begin all over again, and images are already pouring in.

Perhaps the most prominent photo depicts is what the internet has dubbed a "space horse", a prop animal bearing some resemblance to The Empire Strikes Back's tauntaun. While only the head is visible, Lucasfilm will likely spin some kind of computer magic in post to create the appearance of a living alien creature. Witnesses seem to believe either John Boyega or his stunt double was on the prop, so we shouldn't be surprised to see Finn riding it during the finished film.

More interesting to me, however are some of the alien and costume designs. Instagram user "ivapiva86" is apparently vacationing in Dubrovnik, and has used the opportunity to snatch photos of scenes mid-taping as she walked by. A variety of robed alien beings can be seen, along with what appear to be guards holding a position on the beach.

What's it all mean? No idea! Unless Episode VIII is actually called Finn Rides A Horse, there are still a lot more details not even set photos can reveal. All the same, it will be intriguing to watch how it all fits together over the next two years. Star Wars Episode VIII reaches theaters on Dec. 15, 2017.