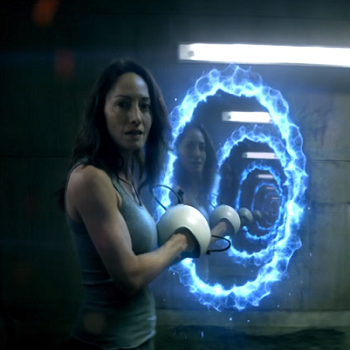 The notoriously busy director/producer claims that movie adaptations of both popular Valve games are "still in development."

It's has been three-plus years since J.J. Abrams first announced that he would be teaming with Valve Software's Gabe Newell to bring us not only a movie based on Valve's incredibly popular platformer Portal, but a Half-Life one as well. In the time since...nothing.

While doing the media rounds for 10 Cloverfield Lane, however, Abrams finally broke his silence on the projects, sort of, telling IGN that both films were "Not (done) yet, but they're in development. And we've got writers, and we're working on both those stories. But nothing that would be an exciting update."

Given Abrams' ability to sneak entire movies past us, it's very possible that both Portal and Half-Life movie are already in the can and he's just screwing with us. Then again, given the long and well-documented failure of big studios to bring a "proper" or even "not terrible" video game adaptation to life, it's probably safe to assume that either movie is a couple years away at best.

Though we have no idea who these writers are that Abrams is mentioning, it's worth noting that 10 Cloverfield Lane director Dan Trachtenberg did shoot a short film based on Portal in 2011 that was incredibly well-received by the game's fanbase. With reviewers citing the first-timer's direction as one of the key components of 10 Cloverfield Lane's success, one would have to imagine that he'll be involved in this project in some regard.

As for Half-Life, it might not be so cut and dry. Back in 2010, Valve's CEO and co-founder, Gabe Newell, said that any attempt at a Half-Life movie would be completed in house by Valve themselves, so who knows what the future holds for that picture.

All that being said, I suppose I should close by asking what seems to be the requisite question on these kinds of stories: Could Abrams and/or Valve be the team that finally cracks the video game movie code?