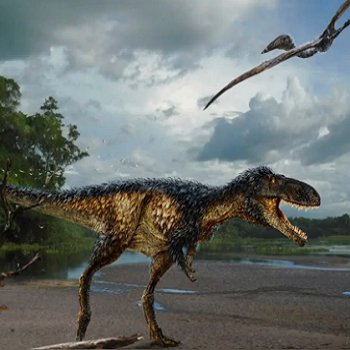 If everything we've learned about the Tyrannosaurus Rex over the years is true, the former apex predator is a big fan of goat meat, is capable of running at speeds faster than most Jeep Wranglers, and has no natural enemies save Jeff Goldblum.

What most of us might not know is that the T-rex wasn't always the 40 ft. long, 15 ft. high bellowing monster depicted in the Jurassic Park documentaries. In fact, they were barely bigger than your average horse for millions of years, acting as little more than scavengers under the reign of the mighty Allosaurus. Somewhere along the way, however, they rose to become the alphas of their realm...until they were replaced by Jeff Goldblum some 65 million years later.

The question of how the T-rex grew so astronomically is one that scientists have been unable to answer ever since, thanks in no small part to a massive gap in the fossil records. That was...until Monday, when scientists unveiled a skeleton of the Timurlengia eutoica, a newly-discovered species that some are claiming to be the missing link between the two forms of the dinosaur. The Washington Post has the details.

Fossils of the new dinosaur were found in the central Asian nation of Uzbekistan. The species appears to have been about the size of a horse, and without the absurdly huge head and the industrial-strength jaws of T. rex. But its brain case indicates that it was rather intelligent, like T. rex, and had many of that dinosaur's advanced sensory abilities, including the ability to hear low-frequency sounds.

So basically, these scientists are simply taking credit for the creature first discovered by Whoopi Goldberg in the 1995 documentary Theodore Rex. Pretty shameful, if you ask me.

The unveiling ceremony took place at the Smithsonian National Museum of Natural History in Washington, where Hans-Dieter Sues, a paleontologist and co-author of the paper describing the discovery, described to reporters how the T-rex likely "got smart before they got large (as The Post puts it).

"The skill set was the key qualification to apply for the job of top predator," said Sues. "Our new beast certainly had very good hearing, certainly better than any other tyrannosaur."

Named after the 14th century conqueror Tamerlane, the Timulengia is being described as "a remote cousin" to the Tyrannosaurus as we know it and is believed to have lived around 90 million years ago. You can read the entire fascinating story on how the Timulengia's skeleton was discovered over at The Post. You can also learn about how Theodore Rex became a crime-solving dinosaur...by watching the movie Theodore Rex.