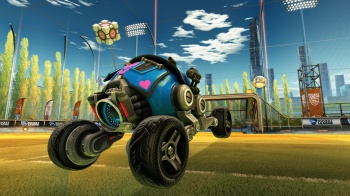 Earlier in the month, Microsoft made a bold invitation/challenge to rival Sony: let's link Xbox Live and PSN together. Sony has yet to officially accept Microsoft's request, but developer Psyonix: the folks behind Rocket League which would be the first game to take advantage of PS4/Xbox One cross-platform play, says that it has already got it all figured out, and is just waiting on the go-ahead from Sony to flip the switch and turn it on.

Psyonix vice president Jeremy Dunham told GameSpot that "Technologically everything works, we've got it figured out, just a little bit of time to get everything up and running. Right now, excitement is the best way to put it. We just want to get in there and make it happen. Elation is probably another word I would use. We're just excited."

He explained that "The only thing we have to do now is sort of find out where we stand politically with everyone, and then it's full steam ahead to finish the solution that we've already started."

Dunham said that the move would be great news for players on every platform: as well as having a much larger pool of people to play with, it would also be able to unify content updates without having to worry abut multiple different closed versions of the game.

When asked about cross-platform play, Sony offered the rather vague response of "We would be happy to have the conversation with any publishers or developers who are interested in cross platform play."

From the sound of things, everything is all ready to go... barring Sony's approval. Come on Sony, I know you don't really like Microsoft that much, but they are extending an olive branch to you here, and this would be great for all gamers! Why can't we all just get along?