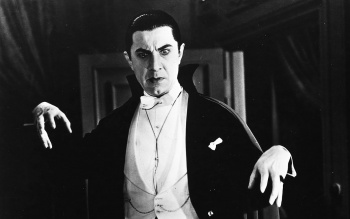 Physics students from the University of Leicester have calculated the amount of time vampires like Dracula would need to obtain an ideal amount of human blood.

Let's say you're a vampire who really needs to grab a quick meal and run before those pesky hunters catch up to you. How much time do you need? We now have the answer, thanks to physics students from the University of Leicester. (Whether they were mesmerized into collecting the information is something we'll never truly know.)

Of course, since this is real science - even it's about vampires - some parameters need to be set. First and foremost, the study assumed vampires don't have to kill anyone to satisfy their hunger. Which is fair, because presumably vampires have to watch their calories like anyone else. Next it decided not to account for gravity, assuming the blood pressure would be strong enough to push it from the wound. That also means vampires don't actually have to suck the blood, so that measurement is out. Finally, it assumed the blood would come out of two small holes in the neck, and that each artery was of equal size.

With this information in mind, the researchers calculated how long a vampire could obtain the maximum amount of blood before encountering diminishing returns. And there's actually a good benchmark for that - once a human loses 15 percent of their blood, their heart rate changes, meaning the amount of blood a vampire could consume is reduced. With all the information above, that 15 percent mark would be reached in 6.4 minutes. After that, your vampire is just being greedy.

Now obviously that can't account for any supernatural variables of specific vampire mythologies, let alone some of the more ridiculous multi-toothed vampire designs we've seen. But overall, it's a fairly sound reasoning for any horror writers who want a realistic timeframe before their vampires need to move on.