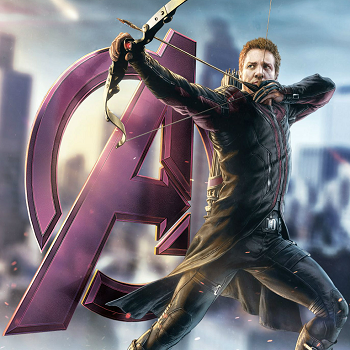 The Hurt Locker and Bourne Legacy star recently stated an interest in bringing the Avenger to Netflix.

The success of Marvel's Daredevil and Jessica Jones on Netflix has been something of a game-changer for both parties. While Netflix has been able to enjoy some of their hugest non-Adam Sandler-related success thanks to that time-tested MCU bump, Marvel have been able to dominate a mostly untapped market, and will likely continue to do so when Luke Cage and Iron Fist trickle out sometime this year.

With shared universes being all the rage in superhero/comic book industry right now, it's only a matter of time before Marvel starts giving their more "established" characters the Netflix treatment. The first actor to throw his hat in the ring: Jeremy Renner, who recently spoke of his interest in such a project during a spotlight panel at Silicon Valley Comic Con.

Hawkeye may not seem like the most obvious (or interesting) choice for a standalone Netflix series, but he also has a much bigger built-in audience than the likes of Jessica Jones or Luke Cage by pure virtue of being an Avenger. Basically, crazier things have happened (and will happen) in the MCU than a Hawkeye series, but the question is, would any of you want to watch it?

Other highlights from Renner's spotlight included his interest in also pursuing a Hawkeye and Black Widow movie -- "In a second. I'd love to do that," he stated -- and this exchange between the actor and a young fan who was confused by the "will they or won't they" nature of the pair's relationship despite the fact that Hawkeye is a married man.

Hey, at least he didn't call Black Widow a slut.