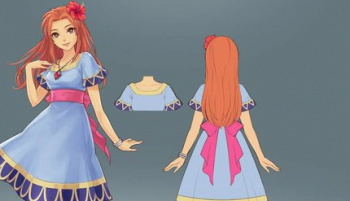 Marin from Link's Awakening has been announced as upcoming Hyrule Warriors Legends DLC.

Nintendo has announced that Marin, the charming ginger Zelda doppelganger from the 1993 Game Boy title The Legend of Zelda: Link's Awakening, will be making her way to Hyrule Warriors on both the Wii U and 3DS in the form of downloadable content. Marin will be available in the second pack of DLC, the "Link's Awakening Pack," which is expected to release sometime this summer. In addition to Marin, the pack will also include 16 new "My Fairy" costume pieces, a new Adventure Mode map with two new challenge scenarios, and a new Linkle weapon.

Hyrule Legends Warriors, the 3DS port of 2014 Wii U title Hyrule Warriors, released on March 25, earning 3 out of 5 stars from The Escapist. From our review: "Hyrule Warriors Legends should have been made a new 3DS exclusive, as the performance issues on the older system make the game nearly unplayable. However, the new characters, and the ability to swap fluidly between playable characters, make the game feel more fresh than a standard port."

Just announced! Marin from Link’s Awakening will be available in the 2nd #HyruleWarriorsLegends DLC for #3DS + #WiiU pic.twitter.com/agAoksoeFN— Nintendo of America (@NintendoAmerica) March 27, 2016