Rumor has it Call of Duty will make the leap to full-on sci-fi later this year. 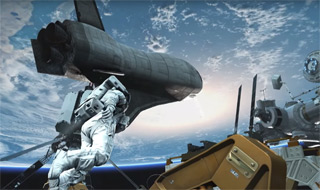 Everyone knows that a new Call of Duty will be released this November. But what might surprise you is that the newest game in the long-running series will be set in space, assuming that the latest rumors are true.

Apparently, the newest shooter will eschew the semi-realistic settings of its forebears and focus entirely on science fiction, throwing the player into space combat between two sci-fi factions who are at war with one another.

The rumors popped up on NeoGAF over the weekend, courtesy of user Shinobi, who is well known for leaking info such as this. Eurogamer also covered the rumors, saying that the information was consistent with "reports Eurogamer has independently heard."

If true, it wouldn't be the first time a CoD title has gone to space. The opening of Ghosts took place in orbit, and Black Ops featured a zombie map that was set on the moon.

Still, this would be the first game in the series to embrace a completely sci-fi setting, although previous titles have included many elements that one could easily point to as a mix of reality and sci-fi.

Obviously, these are just rumors, and we have no way to know what the new Call of Duty might be about, but whatever happens, two things are certain: We'll know a lot more after E3, and the odds are that lots of people will buy it.