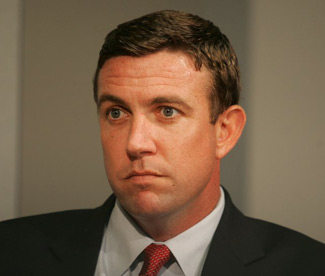 We've all been there. We've spent a little more money on Steam than we intended, whether during a sale or not. But unlike US Representative Duncan Hunter, we are not typically investigated by the Federal Election Commission for it.

You might remember Congressman Hunter as the guy who became well-known on the internet for vaping in the Congressional hearing on vaping.

In a letter to the Congressman, the FEC lists the charges in question. It's not possible to see which games were purchased, but they amount to 68 purchases and a total of $1302. All of these purchases are marked as "Personal Expense - To be paid back," but Congressman Hunter contends that the vast majority of the charges are fraudulent.

A spokesman for Hunter said that the Congressman's teenage son had used his father's card to purchase one game. When his father tried to close access to the website, he states that several fraudulent charges were made to the card. Hunter is apparently trying to have the unauthorized charges reversed before paying out any reimbursement.

You can read the full letter from the FEC, as well as see a list of the charges (although game names are not listed), by clicking here.