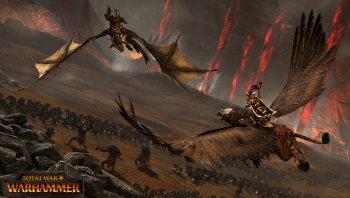 Total War: Warhammer will have a combination of free and paid DLC, which the developer explained in a post today.

In a post today, Creative Assembly detailed the post-launch content updates that will be made available for Total War: Warhammer, with both free and paid DLC that includes new heroes, units, legendary lords, and more.

The "Free-LC" will include things like new units, Heroes, the "occasional new Legendary Lord," and even an entirely new playable race, which will be added "toward the end of the year." There's even a convenient graphic that shows off the plan, which is a "rough idea of our plan on this, subject to change."

Meanwhile, there will also be paid DLC.

Lord Packs will include two playable legendary lords, with their own quest chains, bonuses, and items, Race Packs add either a new race or full unit rosters, heroes, lords, and legendary lords, and Campaign Packs are "supercharged version of a Race Pack" which contains a new race and a new challenge campaign. More details on each of these packs can be found here.

"With both Rome II and Attila we were able to release playable factions, new formats and even a free campaign expansion as a thanks to players for supporting Total War," said Rob Bartholomew, Brand Director at CA, in a press release. "The Warhammer Fantasy Battles World is gigantic, and we're looking forward to exploring it over the forthcoming trilogy. But that incredible cast of characters and monsters also provides us the chance to make lots of interesting Free DLC to support our games over time."

Total War: Warhammer releases on May 24.