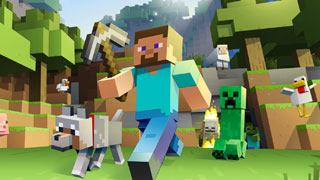 Minecraft Realms, the Mojang-hosted server provider, is expanding onto other platforms. The newest product is a cross-platform offering that will let users of Minecraft: Pocket Edition and the Minecraft: Windows 10 Edition Beta play together, regardless is they're playing on PC, iOS, Androis, or Windows Phone.

Realms is basically just a service for renting a server, so there are of course fees associated with it. The current PC/Mac version charges $7.99 a month for access to a server, and you can probably expect that this new service will come in around a similar price point. For now, though, there's no announced price.

If you want to try out this new version of Realms, there's a free alpha test going on for Android right now. You can sign up for it by visiting the Google Play Store, but you will need a Xbox Live account to participate. Neither the service nor the alpha require your to have a Gold subscription.

There's more info in the post on Mojang's official site, but no word on when the service might go live.